It has been a year since Farming Simulator 22 premiered and following Giants Software’s traditional release pattern it is now time for the Platinum expansion to arrive. The exact date is set to November 15 and as usual it will arrive both as the complete Farming Simulator 22 Platinum Edition for new users and as an expansion DLC for us who already have the base game.

Since it is about forestry the handling of trees have got an overhaul with new tree species, new planting and harvesting methods, and new ways to transport the timber from the forest with the help of winches, loaders and containers.

One of the new things in FS22 – production chains – is developed further by adding new ones (I have counted to eight new factories) and the brand new construction projects. By growing and selling your trees you can help in the construction of big projects such as a rollercoaster (and yes, you will apparently be able to ride it when complete), or making sailing boats at the local wharf.

There will naturally also be new brands showing up in the game. The most well-known probably being Volvo. The Platinum Expansion provides no less than twelve machines from the Swedish brand – from the oldtimer Volvo BM 2654 tractor to the state-of-the-art Volvo FH16 truck and a Volvo L200H wheel loader. There will also be new content from such brands as John Deere, Schwarzmüller, and Komatsu – just to mention a few. A more complete list is to be found at Giants own site.

The Platinum Expansion and Platinum Edition (base game + expansion) will release on November 15th for PC, Mac, PlayStation 5, Xbox Series X|S, PlayStation 4 and Xbox One.

It took a while but by now the milk production at the Atcham farm is in full swing. Which is good because that means that now we can actually start to get some money in for a change.

The MAN milk transport is a mod made by D-S-Agrarservice [Kastor, Floowy, Steven aka W7K] and is available in the official modhub.

Of course since the cows now produce more milk they also needs more feed. So a not insignificant amount of the autumn day had to be spent mowing grass. Both on our own fields and doing contract work for others. This evening job is a contract job, which has the benefit of me having the opportunity to play with some more powerful machines for a change. A heavy duty Case is not within my own budget for sure.

It is getting close to the next big DLC update for Farming Simulator 22, which means it is also time for a new patch for the game.

This time the patch is almost entirely about “under the hood” stuff, but hey, that’s important too. So without further ado, here’s the changelog: 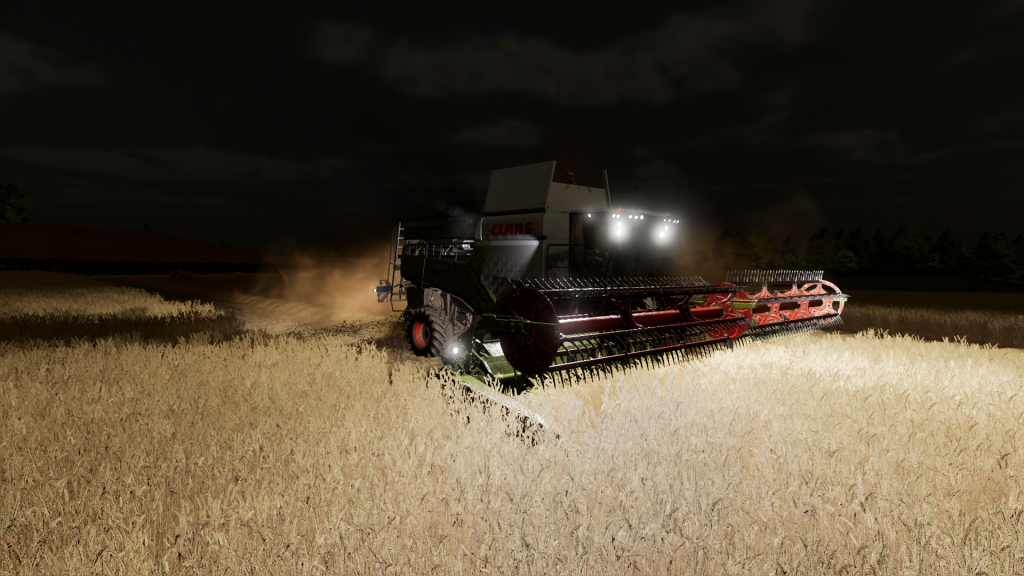 Farm work is still going strong in the just outside Atcham (or Attingham). So let’s do a picture post.

Autumn means harvest time and this autumn I had the luck to find a used John Deere that’s well-suited for the job. And when my own field was done it was time to be a helping hand at my neighbour’s harvest work as well…

…before it’s back to my own areals again in order to spread slurry. And yes, this is a very good example on that equipment doesn’t have to be from the same brand (or the same DLC) in order to work together. The Dupont tank turned out to work very well together with the Schouten spreader. 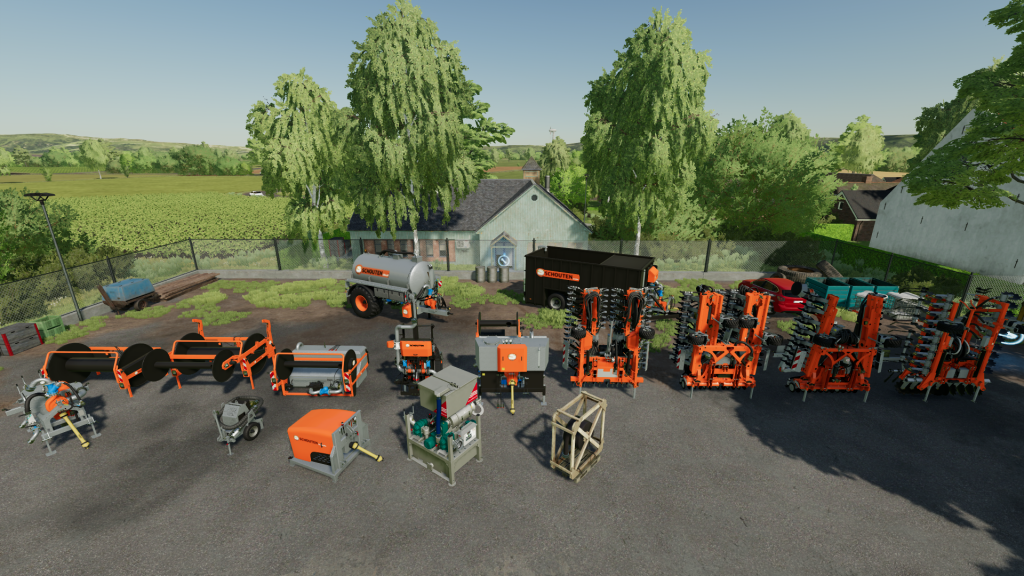 This DLC is focused on the use of liquid fertilizers in the farming and biggest new thing is the possibility to use umbilical hoses. That is hose systems that attach to tractor equipment and the feeds slurry into the spreader while the tractor is running.

In comparison with earlier DLCs, this is numerically the largest yet. With 16 pieces of equipment and on top of that also a number of new placeables, most being used for fertilizer and biogas production.

As usual, you can read more about it on its review page. 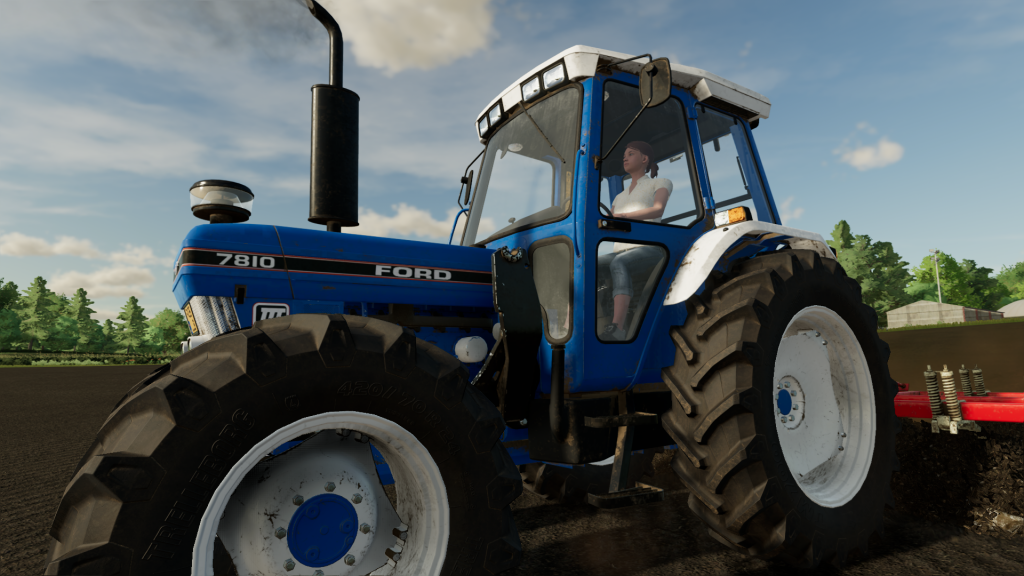 This is nothing remarkable, just the usual everyday going on in the English countryside. More exactly in Attingham Park outside Shrewsbury where we recently acquired a farm. So it’s time to plow the already harvested field and to harvest the one we got while still growing.

The previous owner could have been a bit better at taking care of his fields though. Or maybe he knew he was going to sell. This is not going to be the best of yields.

Starting a farm is always more expenses than income for a while. The autumn being a mix of doing the necessary field work as well as investing in some animals and equipment. Luckily there was at least one harvest that could be sold when winter arrived.

Attingham Park is a map mod made by GBModding. The Ford tractor is a mod by johndeere2450 and Mattxjs, and the New Holland combine is made by Tired Iron Modding and is available here. 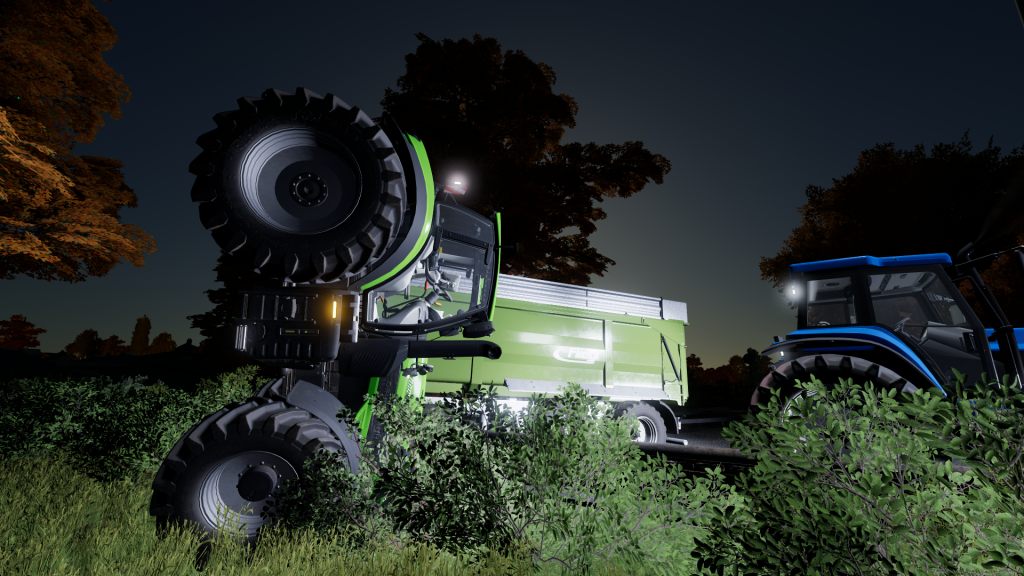 There are many ways to park a tractor. Some better than others.

It’s update time for Farming Simulator 22 again and with that comes some new free content as well.

This time it’s a number of new tractors from the Finnish Valtra brand of which the most novel novelty is the brand new Valtra Q series. But in addition there’s also new added tractors in the A, N and T series.

Since it is an update patch – 1.7.1 to be exact – there’s of course also the usual slew of changes in addition to the new Valtras. 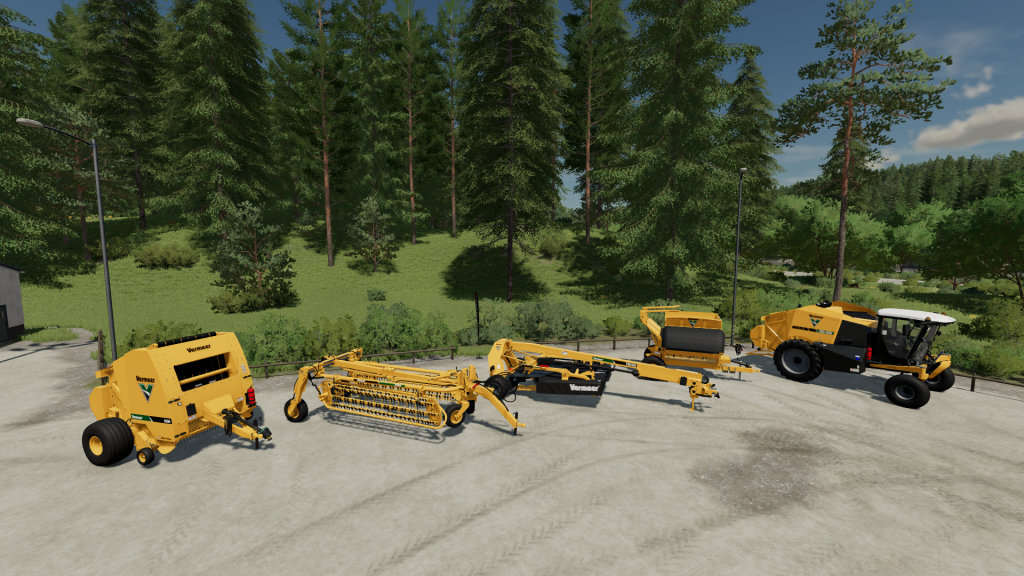 Giants Software has released their latest DLC for Farming Simulator 22 – the Vermeer Pack. This pack adds five pieces of machinery from the American manufacturer Vermeer who specializes in equipment for grassland management.

If you want to read more about it, we now have a brief review of the pack available. 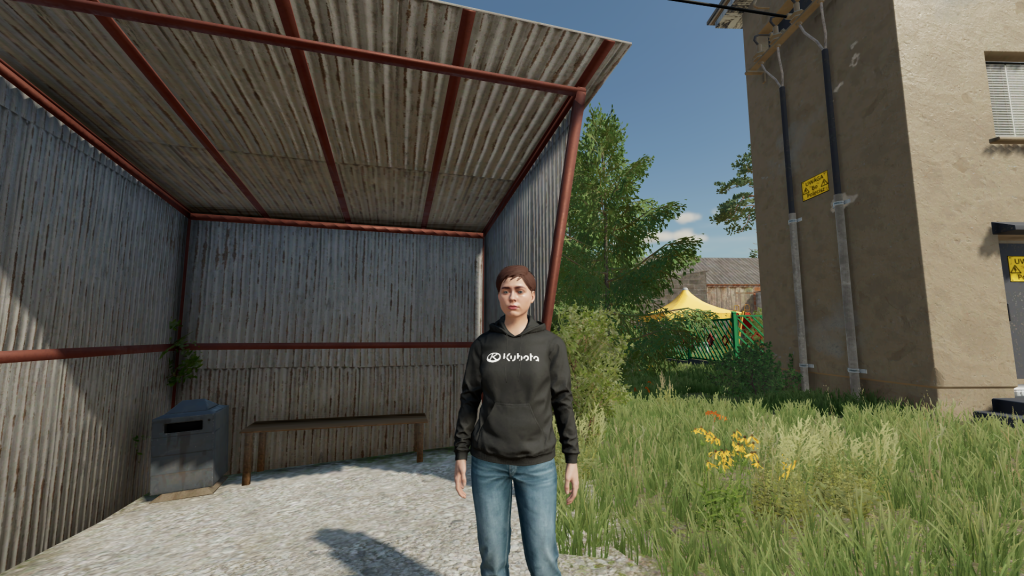 Hello and welcome to Brzozówka – don’t try to pronounce that if you’re not Polish or your tongue might get twisted. Our journey starts at a very logical place – the local bus stop – on our way to the agricultural equipment store to purchase a tractor to start with.

The first tractor being this one. A Zetor Forterra with 117 horsepower. While not exactly the most fancy and exclusive of tractors, it should be quite enough to get me started on the small-size farm. And it is relatively cheap which is a plus considering I have limited funds when starting from scratch.

First mission for it – pulling a subsoiler in order to break up the surface of the field that comes with the farm.

But after that it’s time for a drive back and forth to the store again in order to get a frontloader and a stone remover tool. I know there are nice, big machinery for that, but this is the cheaper way.

It would probably be a rather cumbersome and slow way to do it if the fields were bigger, but for these really small ones it works just fine and voilà, a field ready to be planted.

Brzozówka is a map made by VenTuriO and Pisel and is available in the official modhub. So are the AgroMasz Duro subsoiler by BartsoNv3 and the stone bucket by Nico Pix. The Zetor Forterra and the Quicke frontloader are base game stuff.