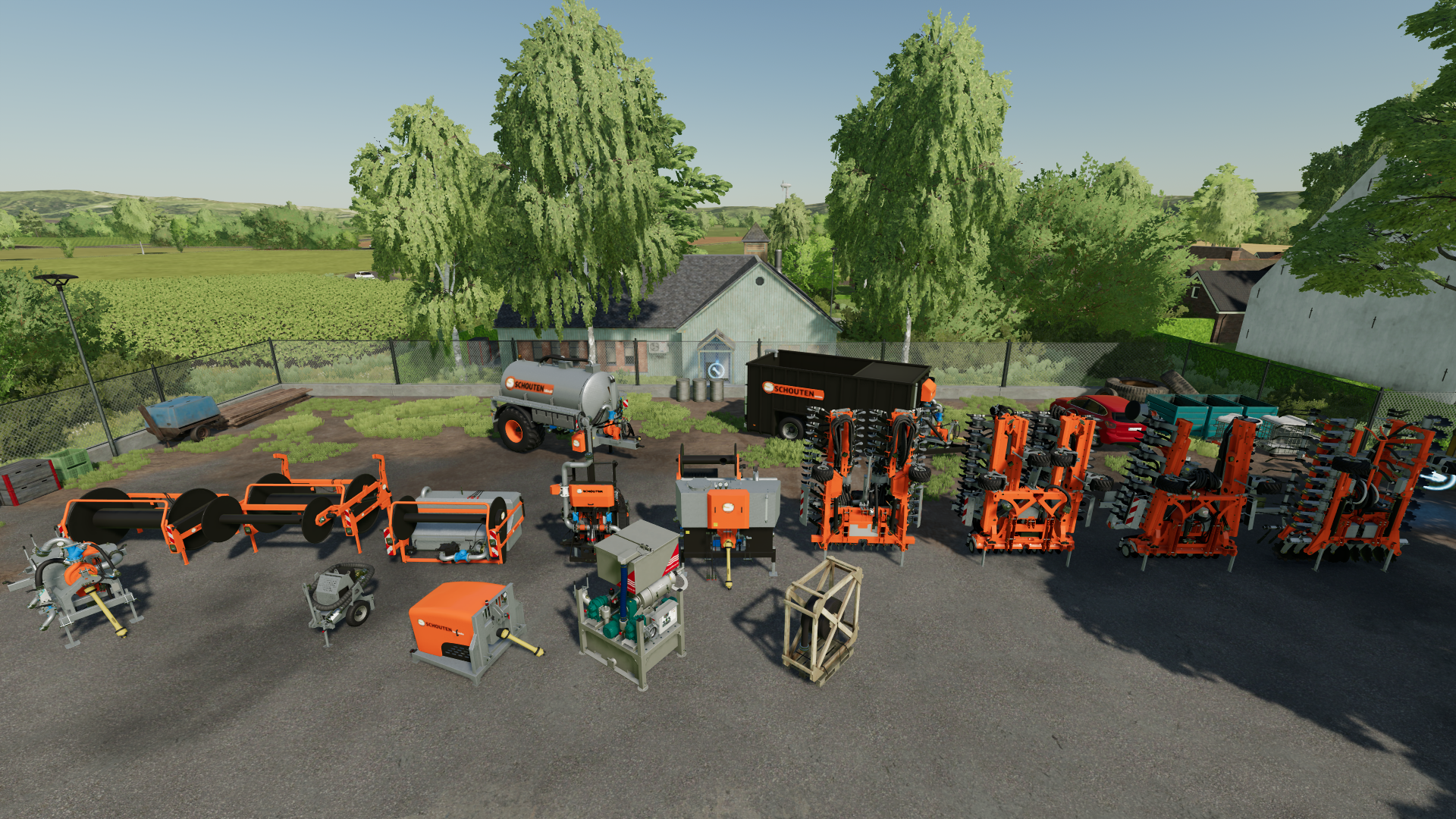 The Pumps N’ Hoses DLC for Farming Simulator 22 is an official DLC made by the modding company Creative Mesh and published by Farming Simulator’s Giants Software. As such it is technically made by a third-party, but under the auspices of Giants. Creative Mesh are not newcomers in this role – they made the Straw Harvest DLC for both FS17 and FS19. But this time it is time for something new.

In comparison with earlier DLCs, this is numerically the largest yet. With 16 pieces of equipment from the Dutch manufacturer Schouten and on top of that also a number of new placeables, most being used for fertilizer and biogas production. Here the brand names are Stallkamp and BvL.

So what is Pumps N’ Hoses all about. Well, mostly about muck. Or liquid slurry to be more exact. The main new thing introduced with the DLC is the ability to distribute slurry to the fields without having to make the usual many tours back and forth to the farm in order to fill up the slurry spreader. Instead you can now use the a technique based on hoses. Very long hoses, preferably.

The technical term for this kind of operation is – as I now have learned – a drag hose system, something Schouten Machines started develop in 1998. And to quote their explanation of it: “A towing hose injector directly connected to the tractor drags the laid out hose behind it. The injector is fed by a pump unit and in this way a continuous system with unprecedented capacity is created.”

Spreading slurry with the use of umbilical hoses means that instead of having the tractor pull all of the needed slurry with it out on the field, it can now be fed through a hose from a separate container parked beside the field. A container which can hold more slurry and thus means the end of those back and forth refilling trips.

At a first glance the handling and usage of the pumps and hoses in this pack isn’t entirely self-explanatory. It did take a while and some experimenting before I got the hang of how the things were supposed to go together. But once past that little treshold it works pretty much as intended. The animations are as nice as can be expected. (Unless doing 180 degree turns which sometimes makes the hose do interesting position changes. On the other hand that’s not exactly moves you sohuld do with a tractor and slurry spreader in real life either. That would most likely be really bad.) Most important I can easily see the sometimes rather tedious work of spreading slurry becoming quite a bit less tedious now when I no longer have to do all those refill journeys.

The second part of the DLC is a number of new placeables in the form of varying sizes of manure pits, slurry storages, and the likes. There is also now the possibility to make complete, buildable biogas production facilities by connecting together placeable parts. In this way you can easily make and control the whole chain of production as well as now having an effictive way to apply the fertilizer onto the fields.

I can’t help but feel that there is somewhat of a missed opportunity here though, in that pumps and hoses could have been used for so much more things. The most obvious one being a possibility to pump water from a water source like a pond or river for use for the animals (because who doesn’t like the opportunity of free water). Or for that matter adding a more realistic, hands-on experience in using hoses for transfering other liquids between places. There is after all more to this world than just slurry. But who knows, maybe these ideas will be for the third-party modders to realize later on.

In summary, this DLC is not for everyone I think. Unless you really like a new, realistic way of handling slurry, manure and the biogas production, the value of it becomes limited and in such a case the price point might feel set a little too high. But if you do want this added functionality and feels it would improve your play, then it is a well-done DLC that actually adds something new to the game – it isn’t just a bunch of new implements doing the same thing as already exists. And for the price you do get quite a number of items in the package.