SCS Software has now publicly announced both of their ongoing map projects for American Truck Simulator.

Already earlier they had announced that now when the big Texas map DLC has been successfully launched, it is time for neighbouring Oklahoma. And maybe not all that surprising the state coming thereafter will be Kansas.

November 15th is the date for the release of American Truck Simulator’s largest map DLC this far. The state in question is of course the big state of Texas and with this addition to the map it will for the first time be possible to drive from coast to coast – if we count the shore of the Gulf of Mexico as that, that is.

But the fact remains, this is a big DLC. Like everything in Texas.

For both games the news are ownable tank trailers, rain sensors that automatically may turn your windshield wipers on and adjust their speed as the sensors registers rain, some changes in how mods are handled in multiplayer convoy sessions, a setting that allow for hiding the out of bounds X’es on the roads

For American Truck Simulator the US-14 road and the accompanying town of Cody, Wyoming, have been added for those of you who own the Wyoming map DLC. There has also been a rebranding of many gas stations and truck stops all over the map – although probably most noticable in the “older” states – since SCS now have become much more skilled in how to make very neat such stuff.

For Euro Truck Simulator 2 there’s been an update of the German city of Hannover, which has also got a newfangled thing called custom introduction to the city. This has also been made for the Austrian cities. In addition the first phase of the implementation of functional JOST fifth wheels on trucks is included in this update.

You can read more about the 1.45 updates on SCS Software’s own blog. The one for American Truck Simulator is to be found here, and the Euro Truck Simulator 2 one is here. 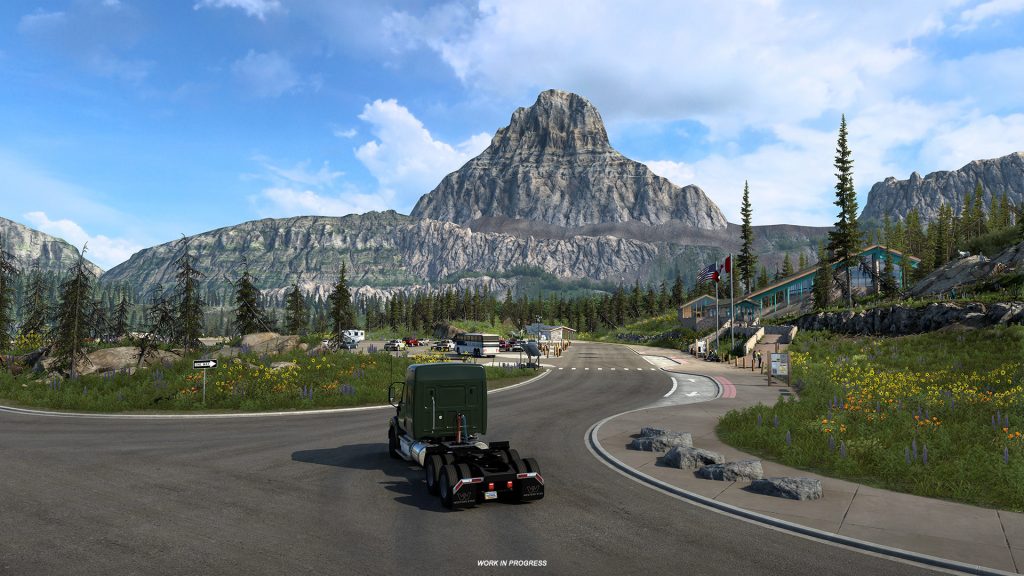 SCS Software has set a release date for their next DLC for American Truck Simulator. The map for the state of Montana will be available for purchase from August 4, 2022.

With the northernmost US state on the east slopes of the Rocky Mountains, SCS is well on the way to get American Truck Simulator rolling over the Midwest.

In addition to the map there will also be new cargo to haul in the form of utility poles, circuit breakers, a garbage truck (yes, as a cargo, not driveable), silane gas, trees, a dumpster, wastepaper and last but definitely not least, a beet harvester. 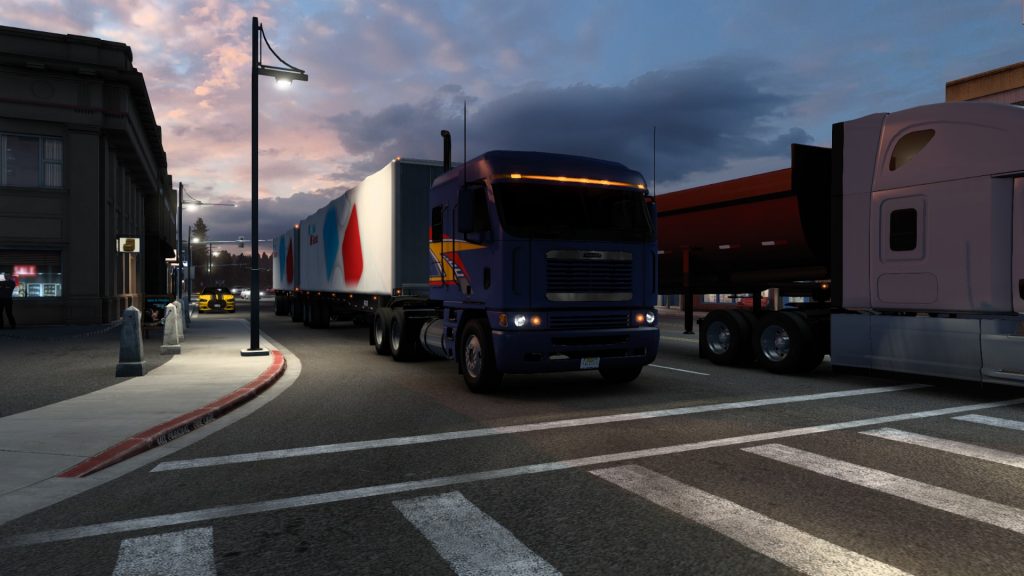 There are times when you just feel more at home in a piece from the olden days.

There’s also the benefit of after having spent time driving around in European trucks right beforehand, this oldie from the turn of the millenium sort of feels more at home with its “the nose ends just in front of the windscreen” construction. I must admit that.

Cabover trucks are as I understand it not all that common in North America anymore, at least not as heavy long hauler trucks. The Freightliner Argosy was produced and sold in the US and Canada between 1999 and 2006. After that its main markets was Australia, New Zealand and South Africa until it was disconinued in 2020.

The Freightliner Argosy in question is a mod available in the Steam Workshop and is made by Harven and Lucasi.

The 1.44 patch for American Truck Simulator is now deployed and it contains quite a bit of updates and additions. Not the least the second part of the rework of the California map. While not as badly needed as the reworks SCS Software is doing for Euro Truck Simulator 2, it still is a noticable improvement over the earlier version and very welcome. 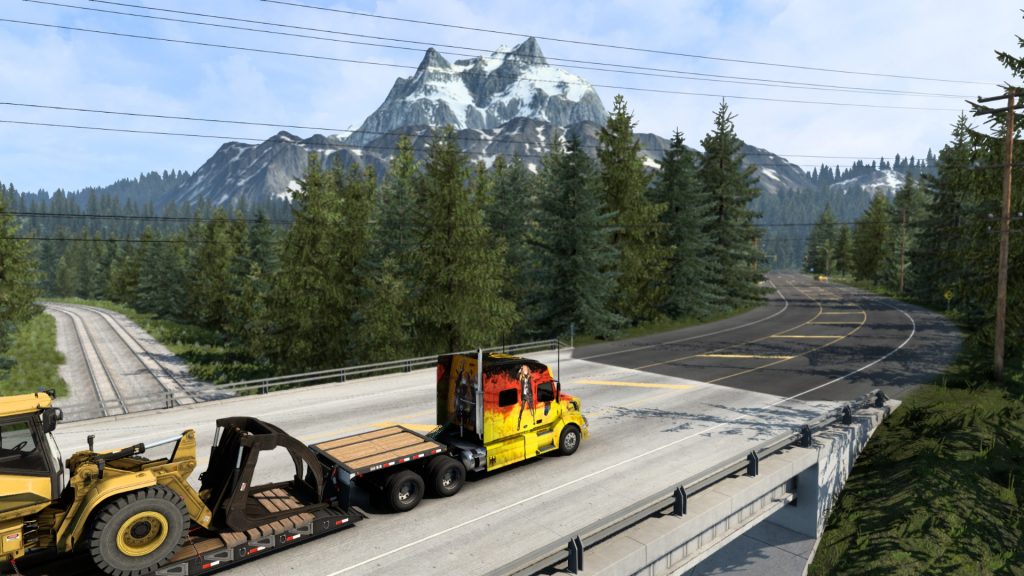 After having accepted to do a delivery to the end of civilization, I sort of found myself taking ad photos in a Canadian sand pit. Seriously, Promods Canada offers some really nice scenery and looong winding gravel roads to get there.

Then however I got back to civilization and had to spend more time sitting in a queue again. But at least even here the scenery sort of made up for it.

There’s now a new truck cabin available in American Truck Simulator. The International Eagle 9900i has been added and is now possible to get at any International store in the game.

As is usual for SCS Software’s game updates of this kind, the addition is released as a free upgrade to the base game. 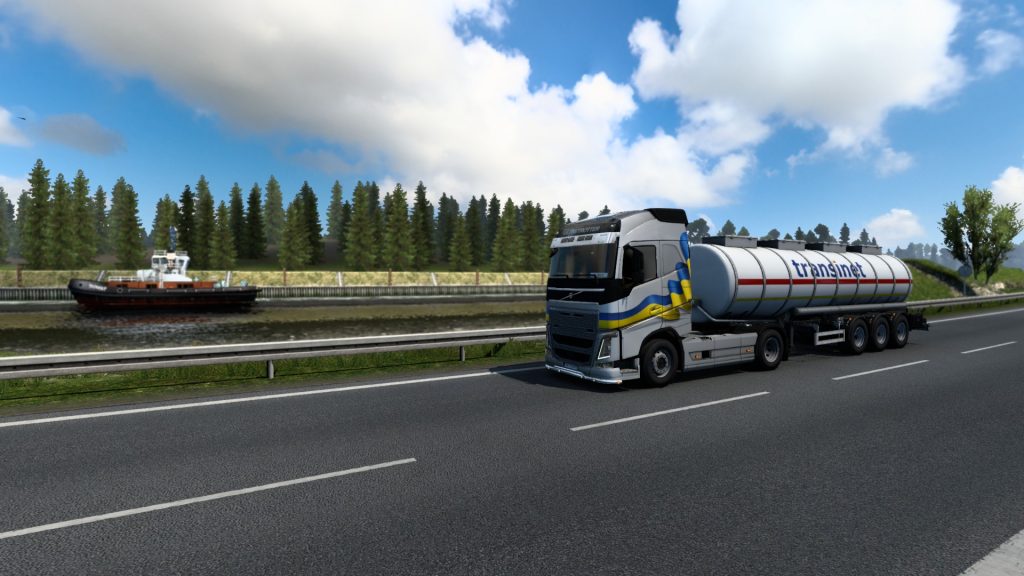