For both games the news are ownable tank trailers, rain sensors that automatically may turn your windshield wipers on and adjust their speed as the sensors registers rain, some changes in how mods are handled in multiplayer convoy sessions, a setting that allow for hiding the out of bounds X’es on the roads

For American Truck Simulator the US-14 road and the accompanying town of Cody, Wyoming, have been added for those of you who own the Wyoming map DLC. There has also been a rebranding of many gas stations and truck stops all over the map – although probably most noticable in the “older” states – since SCS now have become much more skilled in how to make very neat such stuff.

For Euro Truck Simulator 2 there’s been an update of the German city of Hannover, which has also got a newfangled thing called custom introduction to the city. This has also been made for the Austrian cities. In addition the first phase of the implementation of functional JOST fifth wheels on trucks is included in this update.

You can read more about the 1.45 updates on SCS Software’s own blog. The one for American Truck Simulator is to be found here, and the Euro Truck Simulator 2 one is here.

The West Balkans are next in ETS2 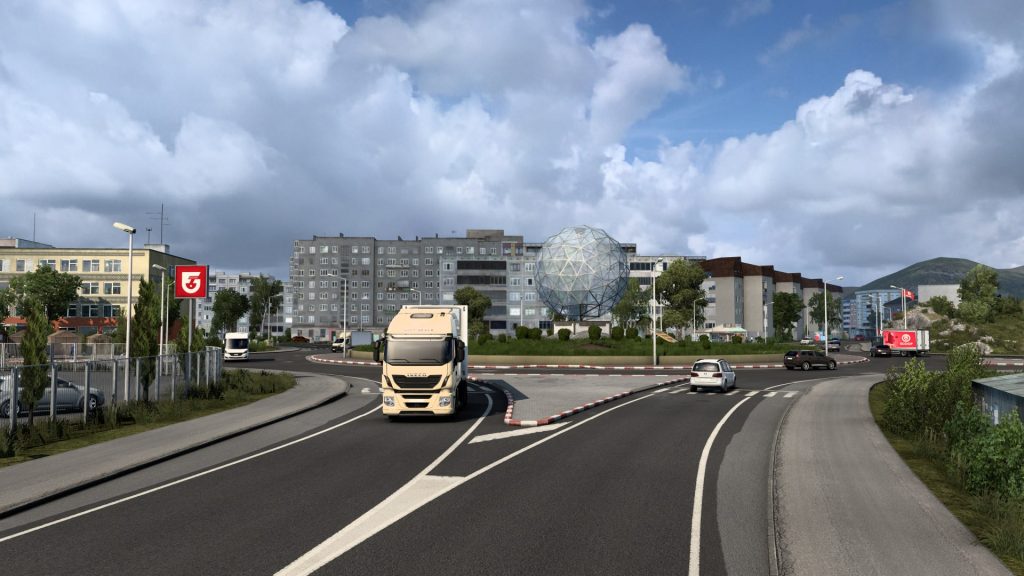 The West Balkans are next in ETS2

After the sort of forced and unavoidable shelving of the Heart of Russia DLC, SCS Software has now made official what the next DLC instead will be. It is time for the West Balkans.

Of course since it’s still early in the development there is no date given for any release yet.

SCS Software has now officially stated that the planned next DLC for Euro Truck Simulator 2 titled Heart of Russia will not be released as originally planned. After some consideration they have taked the decision to put the remaining development and subsequent release of it on hold until further notice.

The reason for this decision is obvious. Now is not the moment to release this particular DLC, neither from a moral perspective nor from a business one. Russia’s attack on Ukraine and the horrible atrocities they have committed makes anything with Russia in its name quite frankly a liability, even if it is something as harmless as a map expansion for a computer game. In my personal opinion SCS has taken the right decision here. 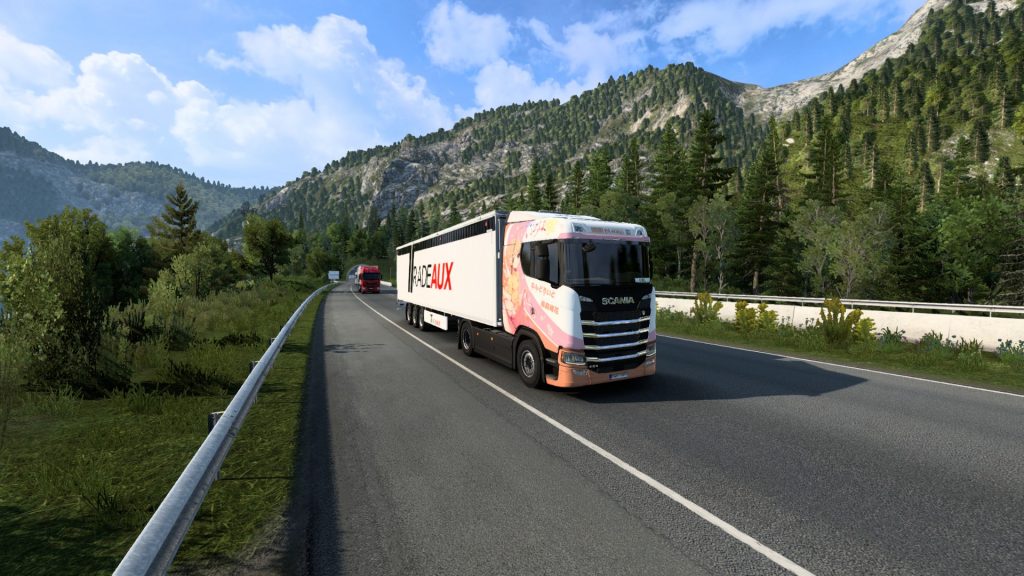 With the latest patch for Euro Truck Simulator 2, SCS Software has released the new version of the Austria part of the basegame map.

Unlike the earlier revision of Germany, the Austria part is a total rework of every road and city in the country. And it shows! The difference from the old version is huge as this part of the map now is up to par with the latest DLCs when it comes to visual presentation and road network.

The fact that big parts of the country consists of very visually delightful Alpine views does make the result of the rework even more welcome. I can’t help but find myself loving to drive through the tunnels and across the valleys.

Euro Truck Simulator 2 has now been updated to version number 1.44. The main difference for us players will be the total rework of Austria, which now is a very different and much more visually pleasing place than in its old 2013 basegame incarnation.

It is winter all around, so why not in Euro Truck Simulator 2 too? On my way with a delivery between the wintry Danish islands.

The winter feel is thanks to a package of mods called Frosty Winter which is made by Grimes and available on his web site. There’s also other seasonal mods there as well as some other. I haven’t yet used any of those though. But the winter one is truly great when you need a change from the ever-summer in the game.

This years Christmas event for American Truck Simulator and European Truck Simulator 2 is in full swing and as usual it’s goal is to transport Christmas gifts between cities. Fulfill the goals and you’ll be rewarded with decorative objects for your cabin. This year’s objects are on the theme “toys of yesteryear”, which means among other things toy mouse, a miniature rocking horse, and a wooden toy soldier.

With some extra thrust 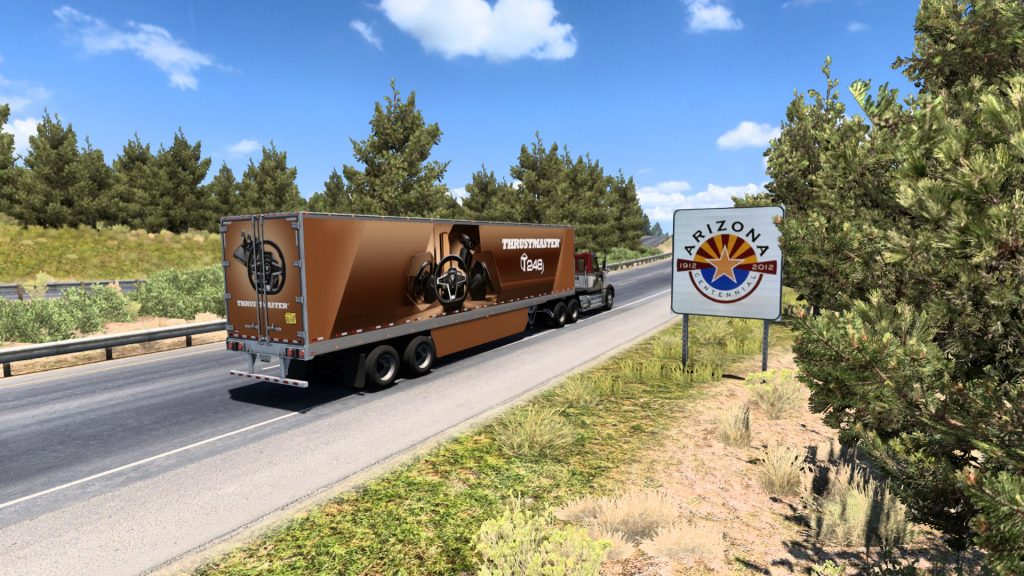 With some extra thrust

It’s event time again in American Truck Simulator and Euro Tuck Simulator 2, and this time it’s all about delivering Thrustmaster equipment around the world. The reward: a nice little soft toy steering wheen plushie and a toy set of Thrustmaster pedals for your truck’s interior design needs. Oh, and closer to real life there’s also the opportunity to win an actual Thrustmaster set too. 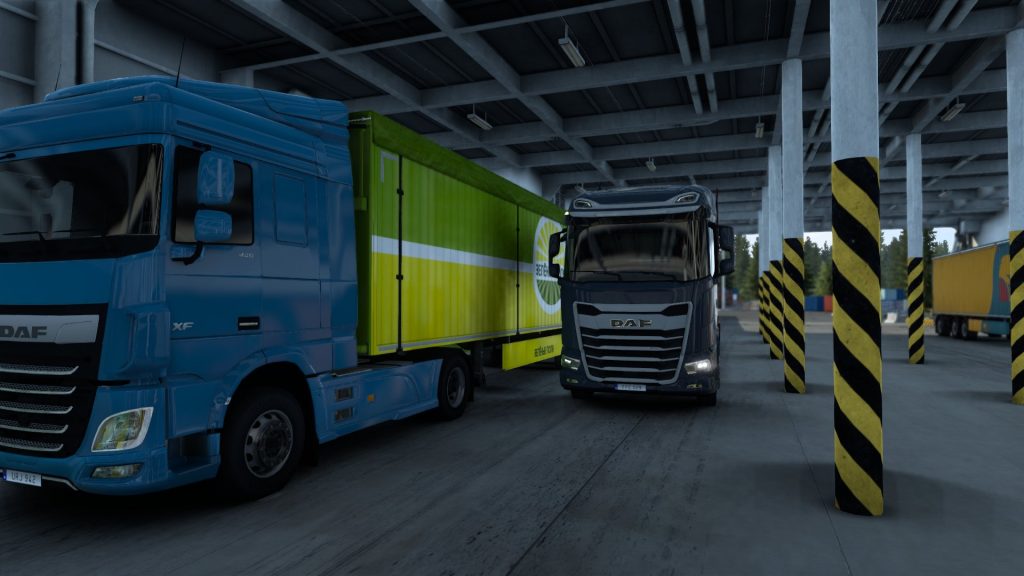 Euro Truck Simulator 2 in cooperation with DAF have added a new truck to the game and of course I had to try it out. So it became a delivery from Stockholm by ferry and fate had it that I would end up beside an older brethren DAF truck.